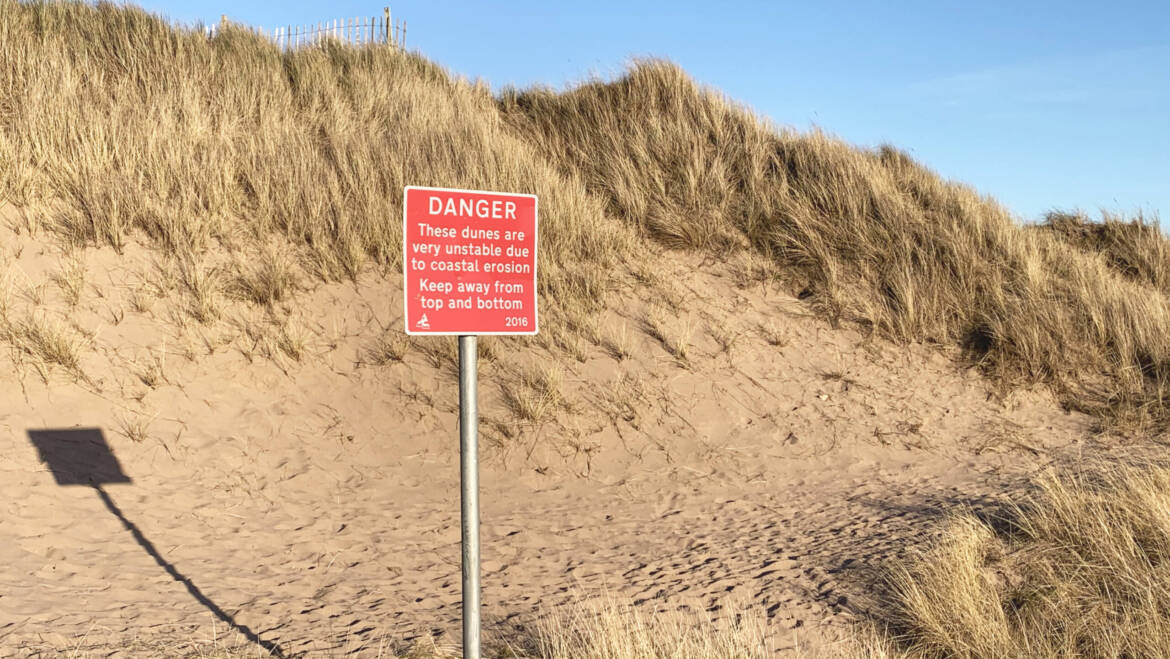 Many of our members have been asking about the coastal erosion that is affecting Montrose Golf Links. There are various opinions on the causes, the solutions and who should take responsibility and the following article tries to set down the situation as it stands.

However, this was a single event in an ongoing series of coastal erosion that experts believe has been going on since the 1970s.

In 2018, a Scottish Government briefing estimated that between 35 and 40 metres of beach had been lost to the sea since the early 1990s.

Their view was that the Montrose coastline could wear away by up to 80 metres over the next 40 years.

The 1562 has already had to move its 2nd, 3rd and 6th holes. Storms at the end of 2013 took another metre and a half off the beach level, and two metres off the top edge of the dunes.

In the last half of 2019 alone, it was estimated that parts of the links eroded by three and a half metres.

But it’s not just the golf courses that are at risk. The existing dune system is acknowledged as critical in protecting areas of Montrose from flooding, as sea levels continue to rise and increased wave heights occur. 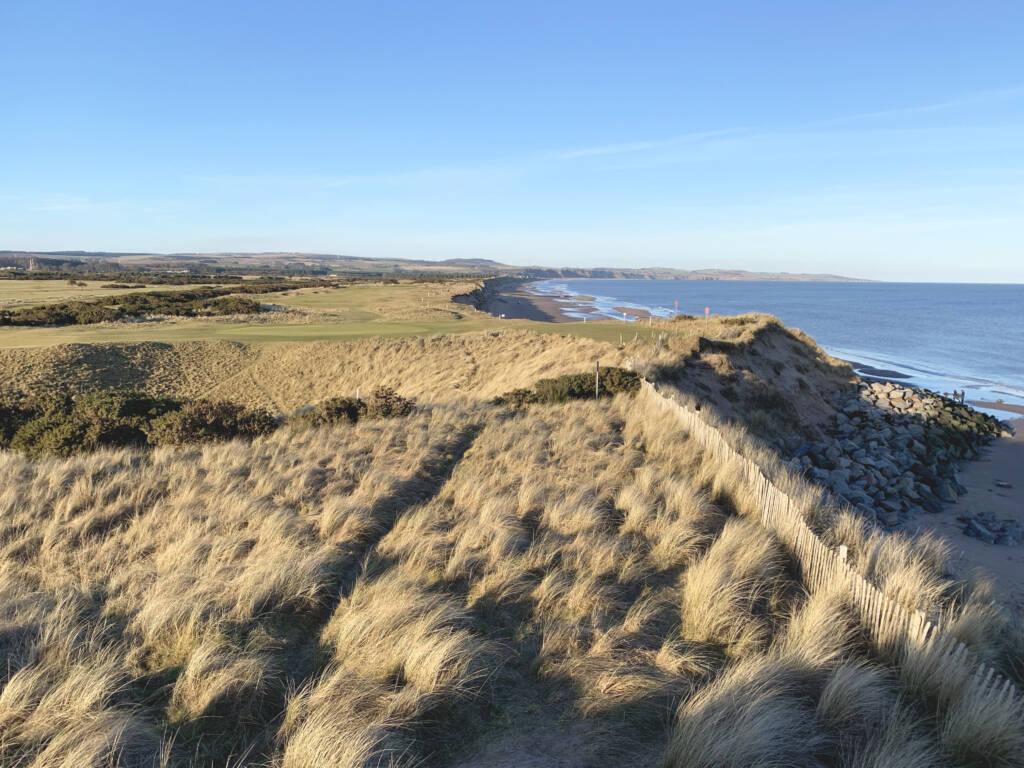 Concerns over the flooding of Montrose caused by erosion of dunes are known to be among the most urgent in Scotland.

Studies by Angus Council and other organisations looked at coastal erosion as an issue, and in particular when the dunes will no longer provide protection to the town, with the earliest prediction being 2030.

So who’s responsible for managing this threat to the future of the links?

Landowners have a responsibility for protecting their property from coastal erosion.

The links are owned by Montrose Common Good, with Angus Council as custodians who have legal control on behalf of the community.

The Coast Protection Act 1949 gives local authorities powers to protect land from the sea, subject to the approval of the Scottish Executive.

Angus Council does have duties imposed by the act to inspect and maintain coast protection structures in its ownership with the objective of preventing erosion and damage, all in the interests of public safety.

Local authorities can fund coast protection work from their general capital grant. Capital works may, if approved, be eligible for grant aid from the Scottish Executive up to 80% of eligible costs.

There is Scottish Government funding for flood risk capital monies available from 2022-28.

In the Programme for Government in September 2020, the Scottish Government announced a new coastal change adaptation budget of £12million to be allocated over four years from 2022-23.

These funds will be available for works to protect natural sea defences such as sand dunes system and Holyrood is currently considering options for allocating the new funds.

Montrose is one of seven “super sites” being studied by Dynamic Coast, a cross-governmental group set up to monitor coastal change.

There have been several suggestions in the past few years on how to combat the erosion.

Experts say that, apart from climate change, a key issue has been the erosion of Annat Bank, a Montrose Bay feature which has historically dissipated waves before hitting the shore.

In 2018, the then links management committee was looking at funding options to install £5million worth of rock armour along seaside holes one, two and three.

Recent discussions with Angus Council, Montrose Port Authority (MPA) and Marine Scotland have looked at changing the depositing of dredged material at Lunan Bay from the port to the coastal zone adjacent to Montrose Beach. This in itself will not solve the problem and the talks are ongoing.

Meanwhile, Angus Council has been looking at the work needed to stabilise the dunes.

They are developing a two-stage approach of raising the dune crest levels above the identified flood levels and then infilling behind the dune crest.

It is believed this would provide an increased level of flood and erosion protection.

It is understood a report will go before the relevant Angus Council committee on 20 April 2021.

The committee would then decide if the options for Montrose are submitted for consultation in the Local Flood Risk Management Plan for 2022–28.

However when it comes to the fate of the golf courses, the council has advised Montrose Golf Links to continue developing its own proposals to realign the golf course away from the coastal edge.

Without owning the land, the organisation has limited options. However a team has been formed to monitor the situation and having walked the course, there is no immediate action to be taken.

However Montrose Golf Links will start planning for changes in the future which will include ongoing realignment of some of the fairways and greens.