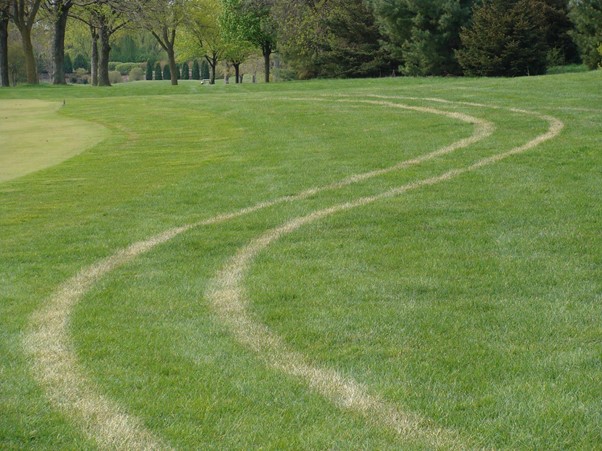 Why do we use winter greens?

Our temporary head greenkeeper Paul Teviotdale has taken some time to explain the importance of looking after the course in winter conditions.

Frost is formed when cool air causes water vapour to condense and form droplets that freeze on the ground. There are a number of different types of frost, but we are principally concerned here with ground frost. 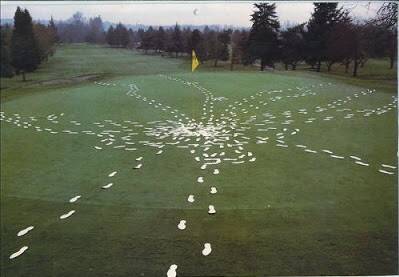 Greens are fragile and when there is a visible frost, the grass plant can become brittle and then crushed when golfers or machinery come into contact with it.

When grass freezes through, water within its cells expand and that can put a large amount of pressure on the membranes

But even when a frost isn’t visible and the top soil has thawed, the subsoil may still be frozen. That can cause root break where the underlying roots are severed and cause the plant to die.

You need to remember grass is a plant. Like all plants, it’s subject to stress and strains.

If you think about our course, we put the grass under strain simply by cutting, whether that’s tees, fairways or greens.

The less stress a plant is under during the winter months, then the healthier it should be when temperatures rise in the spring.

Grass is largely dormant during the winter months, it’s too cold for it to grow and this means it can be vulnerable.

When golfers walk across frozen grass – and particularly greens – the compaction can cause bruising underfoot, barriers between cells break and the plant is killed from the inside.

As temperatures rise, the dead grass turns brown and wastes away.

This kind of damage can last well into the spring until temperatures really start to rise and growing resumes. 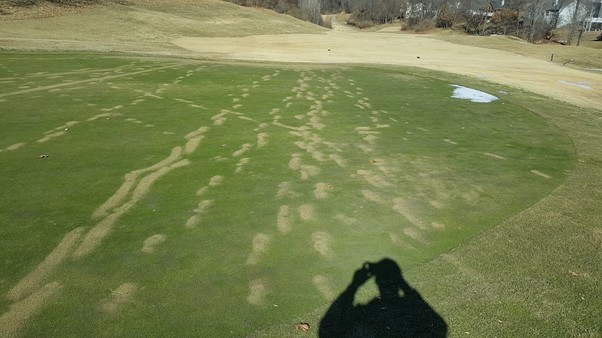 Here is a photo of a fellow greenkeeper with frost damage on a green. You can see all the dead grass where golfer have been walking. 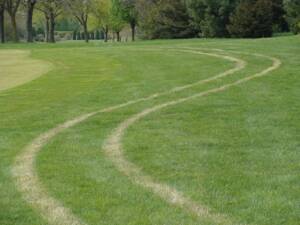 Tyre marks from golf buggies also have an effect

The lush green fairways at Montrose Links are a delight for golfers but also attract an entirely different audience.

The damage that rabbits cause on the courses is clear for everyone to see but how do we tackle the problem?

The vast extent of gorse provides a natural habitat for the rabbits. And as you can clearly see from the damage, they are creatures of habits and will, once established, return and continue to cause damage to the turf. 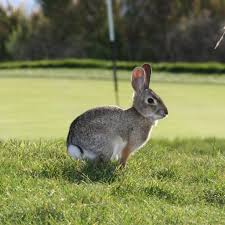 There are a number of ways of controlling rabbits, namely fencing the area, or shooting, trapping and ferreting to reduce the population.

As far as fencing the course boundary is concerned, we have looked at replacing the fencing around the boundary areas but Montrose Golf Links would be liable for the full cost.

We have tried ferreting but this has proved to be of limited success so far.

An added complication is that as there is public access to the ground, we can’t use any form of chemicals or tablets.

However, we are working on the problem and 2,042 rabbits have been removed from the courses since the beginning of May 2020.

In as far as tackling the damage they have caused, we have tried to repair the rabbit holes by patching or returfing.

This has been completed to the best of our current ability, but due to the volume of rabbits and limited staffing levels, the number of spare hours to do things like patching rabbit holes and cutting down gorse is limited.

Paying for a contractor to do this is also very expensive.

You can help though. If any member is prepared to help the greenkeeping team reduce the rabbit damage, it will be gratefully received.