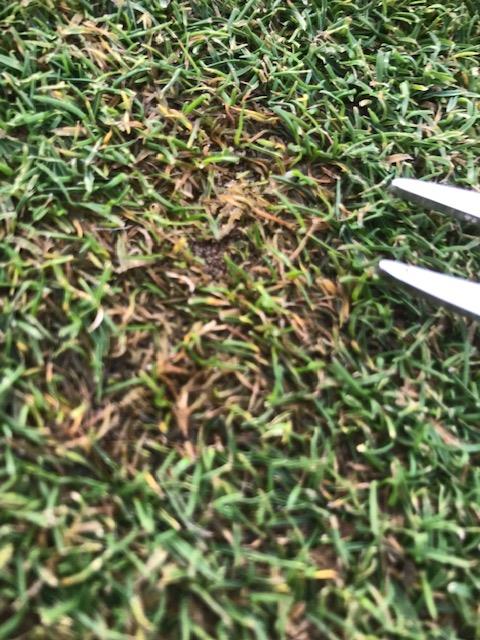 A very positive month here on the Montrose links!!

Firstly we had our opening planning meeting with the R&A regarding The girls Amateur Championship which we have been extremely lucky to be awarded in 2019. This is the premier junior girl’s competition anywhere in golf and the 2019 event commemorates the competitions 100th anniversary. To be staged in August of next year this tournament will without a doubt be the biggest competition our 1562 course has had the privilege to host. Almost every golf country in the world will be represented along with the world media, which gives us a fantastic opportunity not only to showcase our fantastic golf courses but also the town itself. We hope season ticket holders will embrace this fantastic occasion along with our staff, giving us the best possible opportunity to put on a really great tournament.

Secondly our esteemed Deputy Les Rae has been nominated by the leading industry body STRI for conservation greenkeeper of the year. This is Les’ 2nd nomination in a row and is hoping to beat the top 4 place he received at last years’ awards ceremony. As most will know Les puts a great deal of time and effort into making our golf courses a more hospitable environment, not only for the indigenous species of grass plants but for wildflower, insects, birds and small mammals. Les also gives talks on coastal erosion and ecology in general resulting in a great deal of time outside work being taken up. This nomination is no more than deserved and we all wish Les the best as he seeks to go one better this year by claiming first price.

Last but by no means least; the club have been officially awarded the Golf Environment Organisation (GEO) certificate. This is the most comprehensive sustainability accolade in the golf industry today and focuses on 3 main areas:

The club have been working tirelessly towards this prestigious award as far back as 2007. This has involved members such as Carol Littlewood, Morag Boyd and Steve Davis as well as our secretary Claire Penman and of course Les Rae. Any club wishing to host R&A events must be GEO certified and massive thanks must go to those involved for their time and effort.

As many will know and no doubt have on occasion had to play from, winter greens are now in operation. This is predominately on frost conditions and is purely to protect the grass plant. Some of our season ticket holders have approached greenstaff, asking the specific reasons this measure is implemented – a very natural question for any golfer to ask. In short we carry out these measures to preserve the health of the grass but there is a little science behind this:

Approximately 85% of the grass plant tissue consists of water, when temperatures drop this freezes the plant effectively rigid resulting in the grass becoming brittle. Any pressure such as foot traffic causes the ice crystals to penetrate and puncture the cell wall which bruises and can potentially kill the plant. When the frost lifts, black footprints can clearly be seen on the turf, these are patches of damaged or dead grass. Going into the dormant season this severely reduces the plant’s capacity to repair and recover putting the grass in a weakened state which is then susceptible to disease. This can all result in the thinning of the grass sward leaving the greens with bare patches which not only affect the aesthetics but also ball roll. By placing the greens on temporary positions during inclement weather we are giving the greens every opportunity to be the in the best possible condition for season ticket holders and members alike. It’s a little short term pain for a whole lot of long term gain.

It must be noted that not all adverse frost conditions are visible to the naked eye – if the frost has been in the ground for a period of time then the subsoil is likely to be frozen several inches down, taking considerably longer to thaw. Therefore, when frozen conditions (i.e. white frost) appear to have subsided, greens can wrongly be judged safe to play upon. The issue here is that while the white ground frost may have abated, below ground temperatures take longer to rise. Walking on this vulnerable surface where soft meets hard results in a shear which effectively breaks the roots of the grass plant. I must say though these root-shear conditions are fairly rare due to the milder (and wetter) winters we have received since 2011. As with anything we appreciate the patience shown during these times.

This week we have applied our first (and hopefully our last) fungicide of the winter period. This was carried out to counter the onset of fungal disease especially Fusarium (see figure 1). As a modern day greenkeeper working on a GEO certified links we must take a holistic approach to manging disease outbreaks – prevention is better than cure. Therefore we employ traditional cultural methods as a first line of defence. This includes regular top-dressing which will dilute thatch, the physical removal of excessive organic matter or the regular aeration practices which allow the rootzone to breathe oxygen, stimulating beneficial micro-organisms, which then in turn break down thatch the way nature intended. Cultural methods are the very basics of greenkeeping and have been around for many years, in many different shapes and forms – we plan our entire maintenance schedule around this tried and tested concept.

Biological control is another weapon in our armoury. By converting to a more sustainable fine perennial grass sward of bent and fescues, which are far less susceptible to fungal disease outbreak, we swing the balance in our favour.  In last months’ newsletter we talked briefly about poa annua and the reasons behind our attempts to lower populations. This is essentially one of the main objectives of integrated disease management – by reducing the percentage of disease prone grass we reduce the severity of attack. As stated we have a high percentage of poa which we aim to replace by the more hardy perennial plants such as bent and fescue. By committing to this species exchange program we aim to produce a more sustainable sward, which thrives on dry, firm rootzones while harbouring less disease thus producing the finest putting conditions in golf.

Reaching for the fungicide bottle is the very last line of defence and we will only apply this once the disease has broken acceptable thresholds. 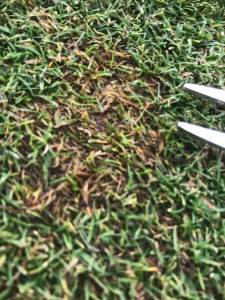 As mentioned previously, integrated disease management includes a range of measures (cultural, biological) we take to prevent fungal disease outbreak caused by an interaction between the pathogen (disease causing micro-organism), the host (plant species) and the environment (see figure 2). First and foremost, we must prepare the rootzone to be conducive to growing our desired species of grass. If a soil is full of thatch and highly compacted then this medium will predominately support coarse grass susceptible to disease. The pathogen is invariably always present in the soil, usually surviving in the thatch layer, hence the reason we strive to keep thatch under control. We must therefore ensure our growing medium is well oxygenated and de-compacted which, as stated previously, will allow beneficial micro-organisms to thrive, naturally assisting hardy perennial grasses. 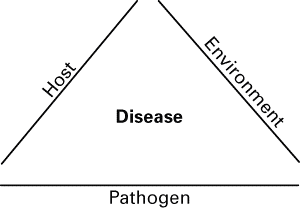 Simple daily measures can also be employed to ensure we minimise the risk of outbreak as much as is possible. For example, some members may have seen staff on the greens removing the morning dew from the surface. This practice is carried out as most fungal diseases require the availability of free water in which to spread. By removing the moisture from the green (host) we reduce the risk of disease outbreak (pathogen). There is only so much we can do however, as we encounter a pro-longed period of wet and mild weather (environment) this then tilts the balance back in favour of the pathogen. Our long-term strategy is to produce a more sustainable turfgrass sward which is less at risk to these harmful micro-organisms resulting in less disease and pest outbreak and more consistent putting conditions. We are well on our way to producing this but at the risk of repeating myself; this is a work in progress.