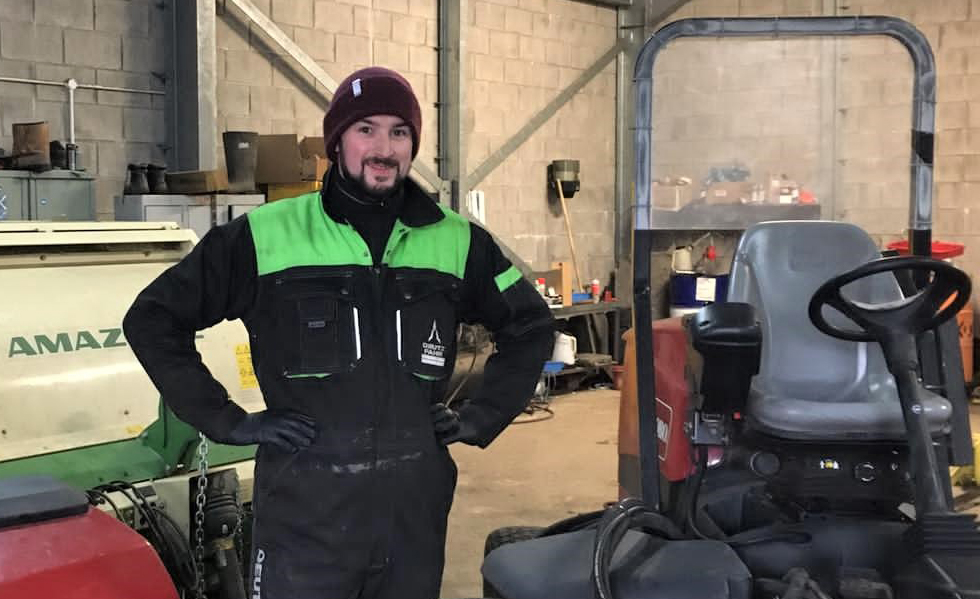 As a Montrose Links member, we know the condition of the course is really important to you.

And as a member, you know a proportion of your subscription goes towards course maintenance.

So how does this work? How do we try to make the Montrose Golf Links courses the best they can be?

To find out more, we spoke to mechanic Sean Walker.

Sean started as an apprentice greenkeeper back in 2006, moving on after a couple of years to become the full-time mechanic on the course.

He looks after a vast array of machinery – he estimates it at over 100 bits of kit – from small strimmers right up to tractors, all of varying age and condition.

“What people maybe don’t appreciate,” said Sean, “is that a machine cutting a tee isn’t the same as one cutting a green. It looks the same but it’s totally different.

“We have different mowers for different tasks, set at different heights and with different quality of blades for tees, greens and fairways.”

Sean looks after the routine setting of the machines – controlling the height and quality of cut – as well as sharpening the blades on the grinder and carrying out repairs.

As a links course, Montrose has a lot of sand to contend with, which takes its toll on the machinery.

“I set the machines every day,” said Sean, “If a mower hits a wee bit of sand or a little stone, the quality cuts out and the efficiency of the cut is really important.

“We operate on very small tolerances and it doesn’t take much to knock them out.” 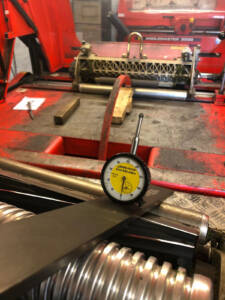 Sean sets the machine’s quality and height of cut. Here, it’s a 4mm for the green but this changes throughout the year from up to 5mm in the winter down to 3.5mm in the summer 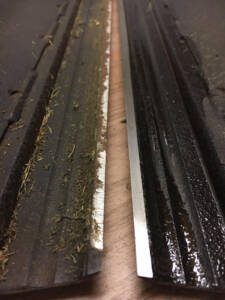 “Blunter blades mean you’ll not have as fast a green, as true a green, and a blunt mower can cause disease because it’s like an open wound instead of a sharp cut.

“You can prevent disease to a degree by having sharp machinery.”

“I understand why golfers want top dressing on the greens because it makes putting a lot smoother, but when you put sand down and then cut the grass a couple of days later, the blades on the mower are blunted much more quickly,” he said. 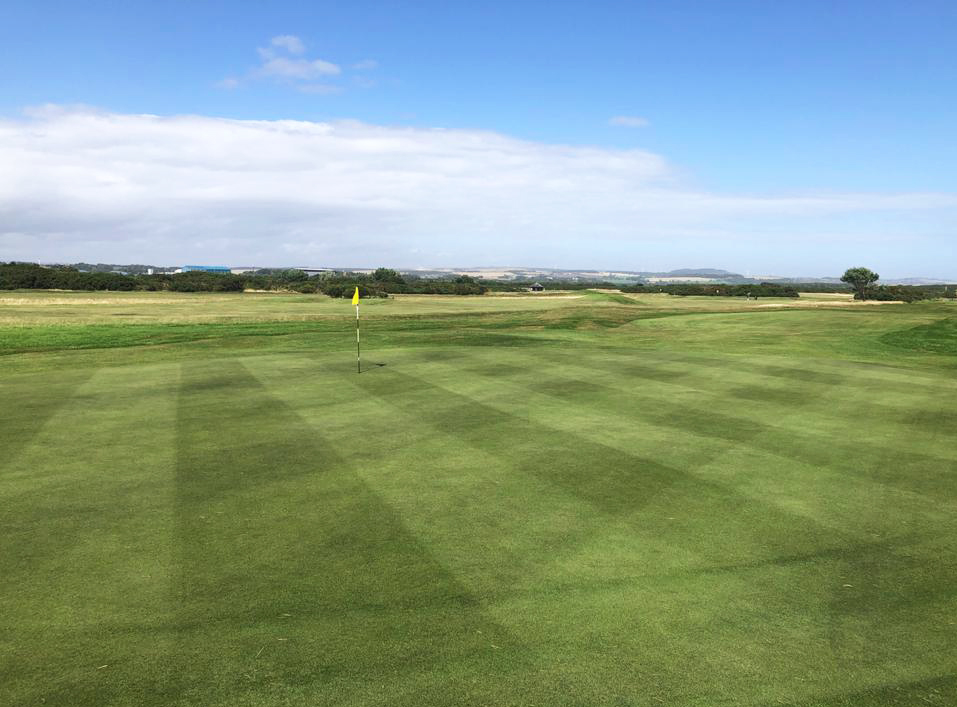 The 17th green at its pristine best 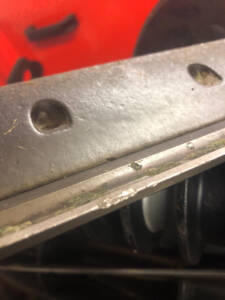 The damage on the bottom blade caused by a discarded tee

Sean is a firm believer in working to make the courses the best they can be, and he had one request for members – to pick up their tees.

“The mowers are designed to cut grass,” said Sean, “If they hit a tee, that goes through the reels and knocks them off.

“So if you hit one on the first tee, the quality of the cut is down on every single tee.”

Repairs take up a lot of Sean’s time at the moment, which means that sometimes his priorities can clash.

“In our world, you do your repairs before your maintenance. The greenkeepers need to be out on the courses so repairing machinery takes precedence.

“But that does means I can spend more time repairing old equipment than looking after the course.”

You’ll have seen the greenkeepers out on Kubota RTVs (rough terrain vehicles). Bought in 2011, Sean describes them as “quad bikes with a bucket on the back” and says they’re the most important bit of kit on the course.

“They don’t cut grass but they’re out there every single day without fail,” he said.

The RTVs should really have been replaced in 2017 as part of a rolling investment programme, but instead the decision was taken to hold onto them.

“I spent a lot of money repairing them last year, nearly £2,500, and I still had to build new drive shafts and things like that. But they need to be 100% all the time because that’s what the greenkeepers need to get out and do their job.”

“A lot of the equipment we’re using should have been replaced a long time ago. Some of it has got to an age that people in the golf course world aren’t even using any more.

“Grass-cutting equipment is extremely expensive, there’s no getting away from it,” said Sean.

“But when we’re spending so much money on repairs annually now – it’s gone up by nearly 40% in the last three years – and the value of the equipment is depreciating in the sheds.”

Sean keeps a manual log of hours the machinery spends out on the course, which he checks to prioritise maintenance.

“Some machines do a lot of hours and it’s a bit like the mileage on your car. An RTV goes out every day so they do a lot of hours. We have tees mowers that only go out twice a week. They might be older but it’s not age that affects the machine – it’s the amount of time it’s been out and in use.

“Some of the equipment here has 6,000 hours and has more or less gone past its useful life.

“I’ll save money where we can, I’ll not go and buy things if we can repair it but the more hours on the clock, the repair bill starts spiralling.” 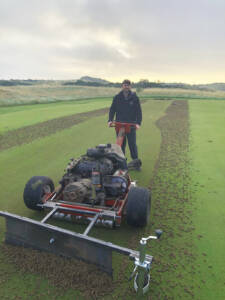 Sean with his core plough

Sean has a reputation for ingenuity so we asked him what he was most proud of.

“I do make a lot of things. It would be this core plough, which came from an old machine destined for the bin.

“It was beyond economic repair so I turned it into a tool for pushing extracted cores off a green, saving the team from doing it manually with shovels.”

Finally, we asked Sean what he would like Santa to bring him this year. Unsurprisingly, it has a mechanical twist. 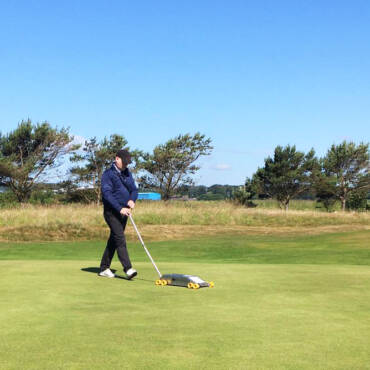 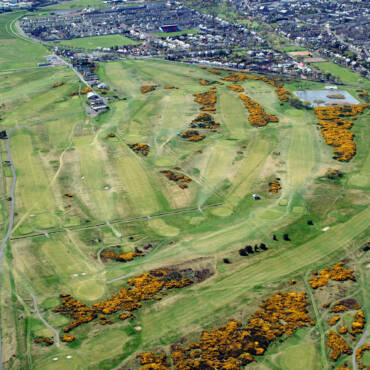