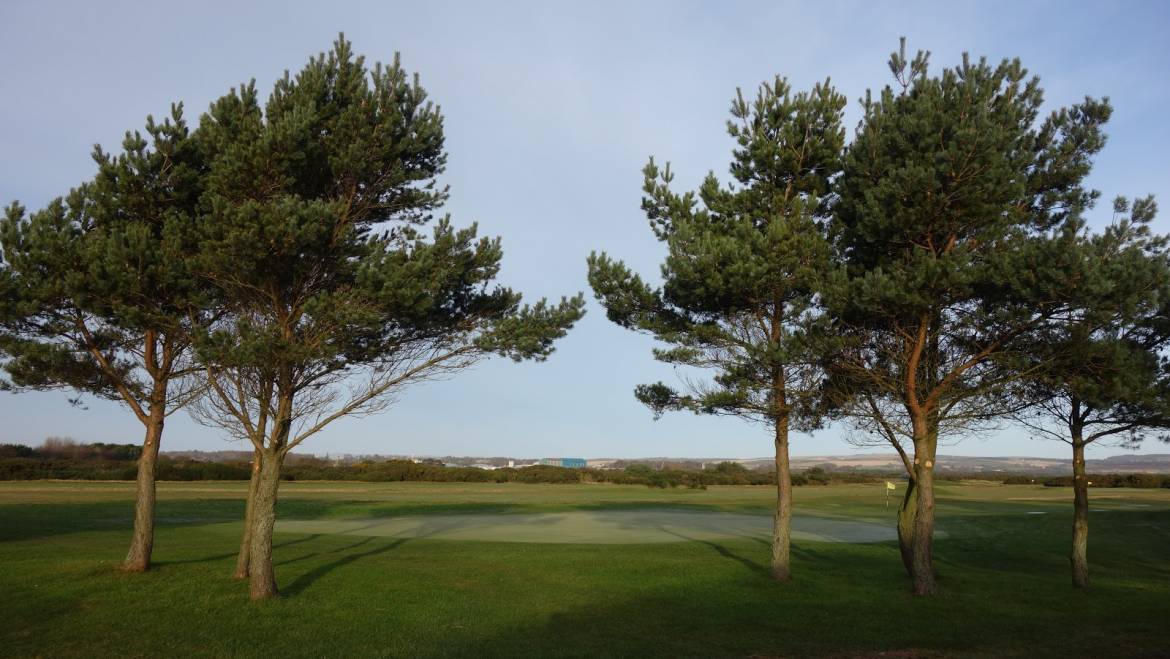 Part one of of our winter work programme (November / December). Below is an update of some of the work that has been carried out so far.

As part of the gorse management programme a number of bushes have been removed from around the courses.
So far we have been working on areas to the right of the 2nd close to the dune edge.  These bushes were creating cover for rabbits with a number of active burrows identified.
The carry at the 5th where patches of heather were suffering due to competition from the more dominant gorse and broom bushes. 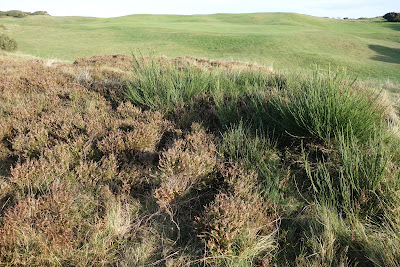 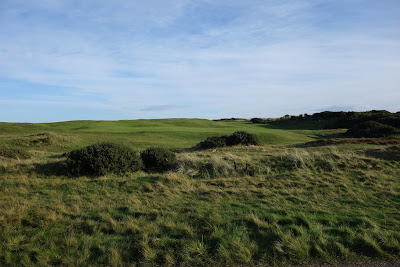 More small stands of gorse that were compromising the heather at the 5th Medal. 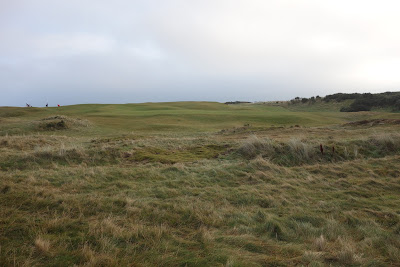 Areas at the 4th and 7th on the Medal have also be tackled with the burnt gorse to the right of the 7th tee removed using a chainsaw together with the Viper chipper, that we have borrowed from Carnoustie Links. 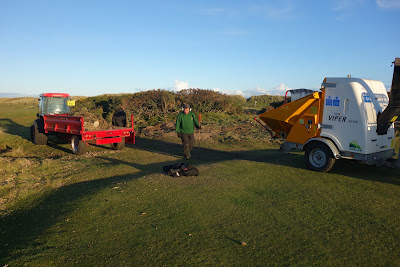 Clearing gorse at the 7th tee, with the chipper in the foreground.

We have also been using a JCB to remove clumps of gorse from around both courses.  A number of the areas that are in play have been re-turfed. 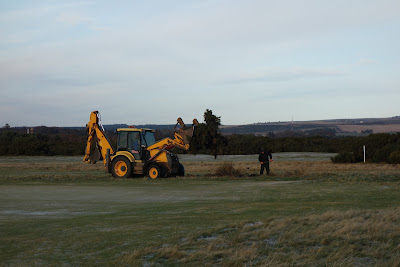 The JCB removing a clump of gorse from behind 5th Broomfield green.

The following bunkers have been rebuilt on the Medal course. 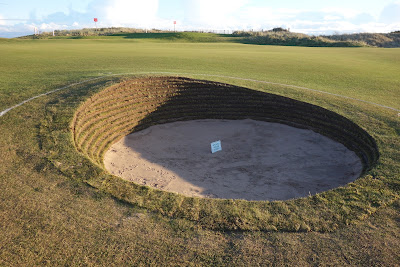 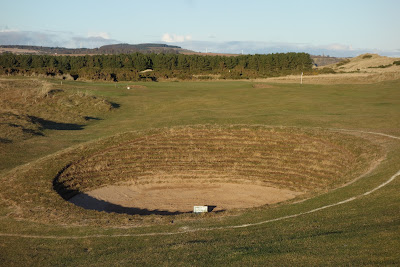 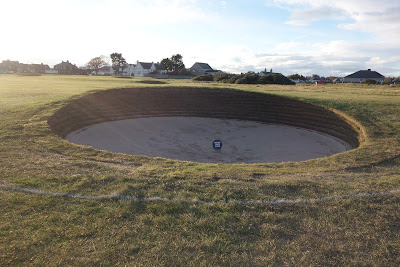 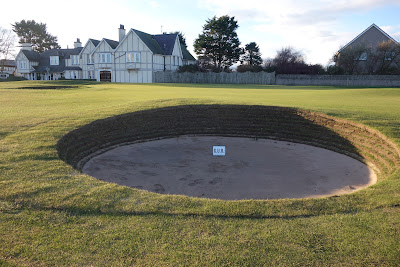 The Astro turf at the 1st Medal tee has been extended, the walk-on area suffered from excessive wear and has been re-turfed on numerous occasions in the past. 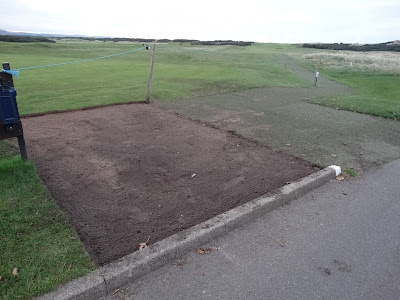 Worn area at the 1st Medal tee removed and ready for astro turf. 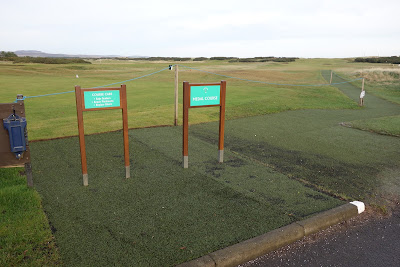 Astro turf down and signs back in position.
A number of path ends also suffer from wear and these are being addressed by installing rubber matting. Turf is laid  in the usual manner and the matting put down on top. The matting is designed to allow the turf grow through it and protect the crown of the plant. In time the matting will be hidden by the grass cover. 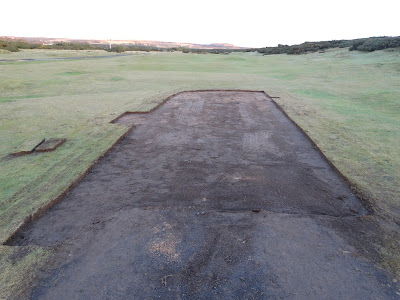 Worn area at 4th Medal dug out and ready to be re-turfed. 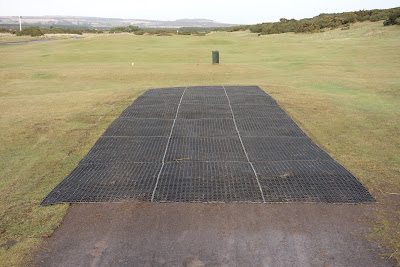 Area re-turfed and matting laid down. 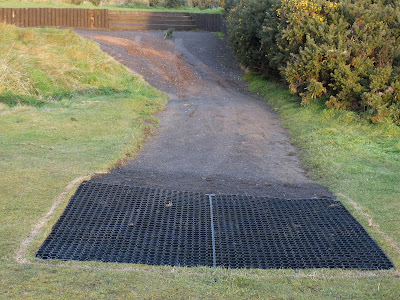 Now that rock armour has been moved to help protect the area leading from the 2nd Medal tee to the fairway, work has taken place to reinstate the path. Once the work had been carried out Astro-turf that we received from Montrose fc was laid down over the full length of the path. 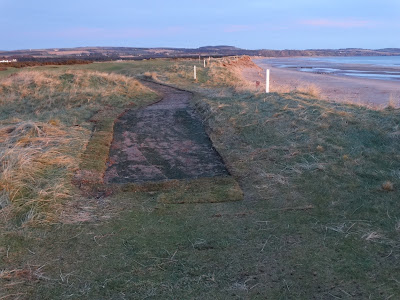 The new astro-turf path leading towards the 2nd Medal fairway. Sand has been
spread on top and will be brushed in to help wear resistance.

We have started to remove the old astro turf at the 9th Medal tee which was ripped in places. The plan here again is to install the Astro turf  along the full length of the path. 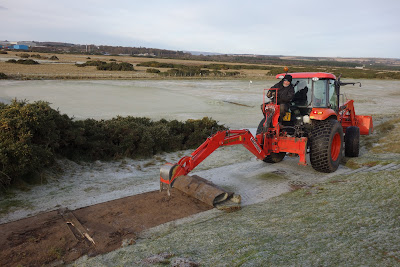 Removing the old astro turf at the 9th Mdal tee.

An area at 8th Medal white tee is in the process of being made into an open sand area. Last year we cleared the gorse in front of the tee and Sophie Vukelic (Ecologist) from the Sports Turf Research Institute said we should consider creating this valuable habitat. All the dead organic matter that has built up over the years will be removed to leave clean sand.  This will then be shaped and clumps of marram grass introduced to break up the edges. 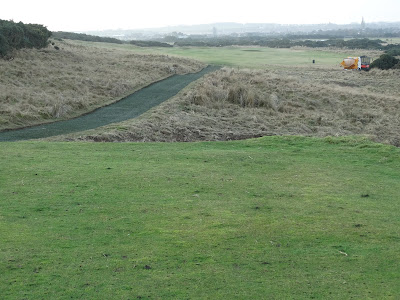 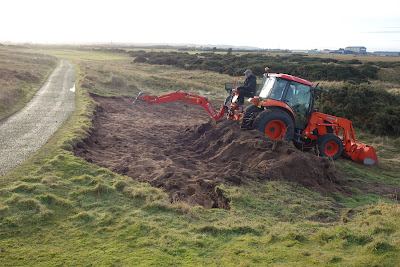 Scraping away the old organic matter. 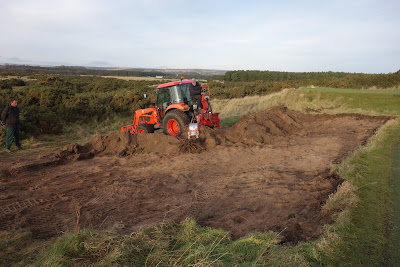 All the stands of pine trees around the Broomfield have been limbed up as many of the branches were hanging down cose to ground level. 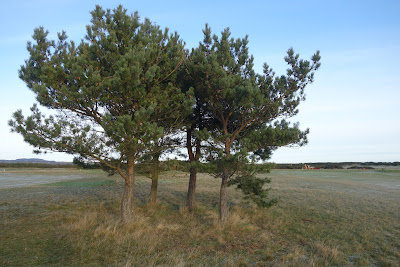 Prior to limbing up. 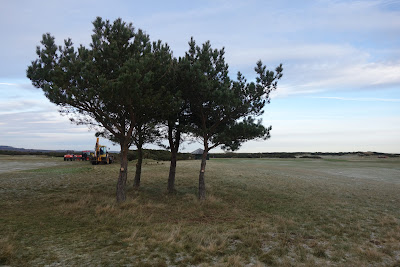 After Limbing up.
Removing the lower limbs is important when trees are close to greens and tees as it lets in more light and aids air movement over the turf. This in turn helps prevent the surfaces remaining damp during autumn and winter which could lead to fungal disease outbreaks. 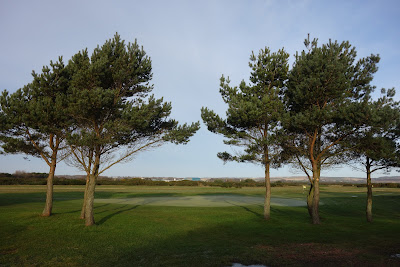 Improved light and air movement around the 17th Broomfield green.

Aeration
Greens on both courses have been hollow cored. This is the first time in a number of years that this operation has been undertaken and was carried out due to an increase of thatch in the top 40mm of the soil profile. Thatch which is dead organic matter can lead to soft water retentive greens and are not the characteristics we are aiming for.  Combining hollow coring and our other aeration work with sand topdressings will help combat this problem and should result in firmer, healthier and more receptive greens

All the greens and tees on both courses have been verti-drained down to a depth of 8 inches. Walk off areas between greens and tees, tees and fairways has started and will continue over the coming months. This operation is carried out to relieve compaction and aid drainage. 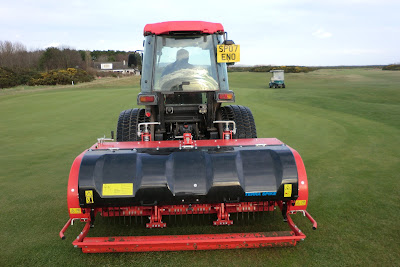 Verti-draining the 13th Medal green
Irrigation system
The system has been shut down for the winter with all pumps drained and pipework valves opened to allow water to drain away. This should help protect the system if we suffer periods of hard frost.

Sean our mechanic has been busy servicing our large fleet of machinery, he is also in the middle of sharpening all the cylinders and bottom blades from our ride on mowers.   Liam one of our green staff has been helping him out, as and when he requires assistance.  Sean also has to deal with any day to day machinery faults and breakdowns. 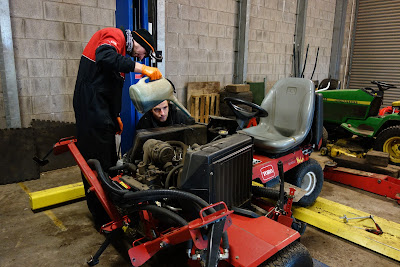 Sean and Liam servicing one of our Toro ride on mowers. 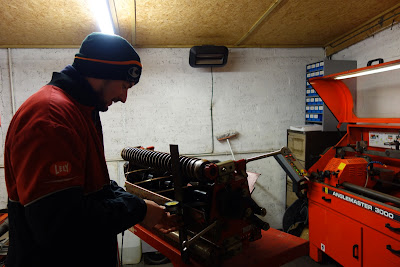 Sean checking one of the cutting units.
Hopefully this update has been of interest and highlights some of the work that has been taking place over the first half of the winter. I will post a second winter update around mid March describing further work that has been carried out on the Links.
Les Rae,
First Assistant,
Montrose Golf Links Limited.